While I was studying chemistry in graduate school at the University of Texas, I befriended a physics graduate student, who was studying echolocation in bats in the hopes that the research might result in helpful technologies for blind people. One day he invited me to his lab to watch as he fed the bats. We entered a small room where dozens of bats eagerly waited for a dinner of yellow grub worms. Many of the bats were hanging from the ceiling but others were flying around us yet never touching us. I looked at one bat on the ceiling as he looked down at us. His mouth was open and his lips quivered as he rapidly rotated his head round and round. I was fascinated. The bat was using his echolocation capability, akin to sonar, to map out the environment. Bats would drop from the ceiling and fly around us then go for the food. My friend’s research revealed that different parts of the bat’s brain were activated depending on the frequency and direction of sound received.

I have had two other close encounters with bats—both in my home. In both cases, I had to catch the bat to have it tested for rabies. As a result of those times, I have come to deeply respect our winged friends. I found the bats capable of tightly controlled flight. While their fluttering appears somewhat random, the bats were able to anticipate my moves to capture them. Using their echolocation, they were able to change their flight path abruptly as I attempted to swat them. They would fly at me then brake off in another direction just before contact. In one case, I was only able to capture the bat after it went to sleep on my living room ceiling! I placed a plastic circular clothes hamper against the ceiling and gently knocked the bat into it. It fell into the hamper, still asleep. I quickly inverted the hamper onto the floor trapping the bat between the carpet and the hamper. It awoke, assessed its situation, and began circling the perimeter looking for an opening. As I was distracted by a conversation with my daughter, the bat spread its wings and became extremely flat against the floor. It then found a space between the edge of the hamper and the carpet through which it crawled and escaped into the house once again!

So just how did this ability to use sound to “see” evolve? No one knows. The earliest fossils of bats indicate they already had echolocation. 1

The problems for evolution as an explanation for biological origins are many. Credible, experiment-backed explanations for abiogenesis, the Cambrian Explosion, the origin of biological novelties (organs, tissue types, adaptations, etc.), the origin of information in DNA and the genetic code, the generation of new functions, etc. are completely lacking. 2,3,4 Echolocation is a complex adaptation which is hard to explain using material processes. To make matters worse, echolocation is possessed by many diverse species such as bats and dolphins. Since the alleged last common ancestor of bats and dolphins, which presumably lived hundreds of millions of years ago, did not possess echolocation, the ability is thought to have evolved independently in two lineages. This is yet another enigma that defies materialist explanation and is referred to as convergent evolution. Convergent evolution is said to have occurred when two species possess common traits, organs, morphologies, or biochemistry that their presumed last common ancestor lacked. Convergent evolution is ubiquitous in the biological world. 5 If evolving a complex adaptation is improbable, how much more improbable is the evolution of the same complex adaptation multiple times across very diverse species? Here we’ll examine the theory of convergent evolution, consider a few remarkable examples, and then present a better explanation for the data.

One evolutionist has proposed that convergent evolution occurs because of developmental and functional constraints on evolving organisms. 8 The idea is that there are only a few viable solutions to the problems of adaptation so that independent duplication of traits is inevitable. Well, if evolution is true, then one has to conclude there must only be a few viable alternatives since convergence of characteristics in diverse lineages is a fact. But this begs the question and exhibits circular reasoning. The conclusion is derived from the assumption of evolution, but where is the independent evidence that adaptations like echolocation evolved in the first place?

As stated previously and discussed elsewhere, 11,12 the probability of evolving a complex organ by the random mutation/natural selection mechanism is exceedingly small. Again consider echolocation. For echolocation to work, there needs to be a high frequency sound generator, a means to aim and transmit the sound, a receiver to detect the echoes, and an ability to process the sound into spatial information/perception about the environment. Imagine all the structures, proteins, tissue types, cell types, and DNA coding involved. Then there is the orchestration of the construction of these structures during embryological development. All these structures and abilities must be present simultaneously for echolocation to function. And all of these structures would have had to evolve in a coordinated fashion without any guidance other than natural selection acting on random mutations. This is nonsense. Echolocation is yet another example of irreducible complexity and strongly suggests intelligent design.

Echolocation is a biological “super power” possessed by many diverse creatures including some species of bats, birds, tenrecs, shrews, whales, and dolphins. 13 Consider the diversity here: land animals, animals capable of flight, aquatic animals, mammals, and reptiles, and all have echolocation! A comparison of the genes and proteins of echolocating bats and dolphins led one observer to comment:

Dolphins and bats don’t have much in common [size, habitat, locomotion, etc.], but they share a superpower: Both hunt their prey by emitting high‐pitched sounds and listening for the echoes. Now, a study shows that this ability arose independently in each group of mammals from the same genetic mutations [emphasis added]. The work suggests that evolution sometimes arrives at new traits through the same sequence of steps, even in very different animals. The research also implies that this convergent evolution is common—and hidden—within genomes, potentially complicating the task of deciphering some evolutionary relationships between organisms. 14

Over 200 genes 15 involving 805,053 proteins 16 showed evidence of molecular convergence! Of particular interest here is the protein prestin, which is involved in the hearing of most mammals. The genes for prestin in bats and dolphins show signs of convergence. 17,18 This is considered one of the most spectacular examples of biochemical convergence known.

By the way, the complex echolocation of dolphins has been beautifully explained in detail in Illustra Media’s 2015 documentary film Living Waters and can be viewed online. 19 What a remarkable ability!

The completely independent evolution of biosonar systems of very different-sized mammals in two such different media would at first glance likely be predicted to entail very different properties, frequency ranges, and sampling rates. However, in this review, we use recent field data to show that bats and toothed whales have evolved remarkably similar acoustic means to locate and catch prey with ultrasound, offering a fascinating area of research in comparative sensory physiology.

Despite being as different mammals as imaginable in size and general morphology and living in the two very different media of air and water, echolocating bats and toothed whales [dolphins] use surprisingly similar call frequencies to search for, approach, and capture prey.

In conclusion, echolocation in bats and toothed whales involves surprisingly similar call frequencies and acoustic behavior and offers as such an example of striking functional convergence where two very distantly related groups of mammals independently evolved the capability to hunt and navigate in the dark using ultrasound in much the same way.

Genetic and functional convergence of echolocation across diverse species is a marvel that challenges the theory of evolution in many ways.

It’s an amazingly complex structure for a single-celled organism to have evolved,” said lead author Greg Gavelis, a zoology PhD student at UBC. “It contains a collection of sub-cellular organelles that look very much like the lens, cornea, iris and retina of multicellular eyes found in humans and other larger animals. 23

The microbe’s camera eye is shown below: 24

The structural similarities of the camera eyes of humans and the octopus are striking as shown in the figure below: 25 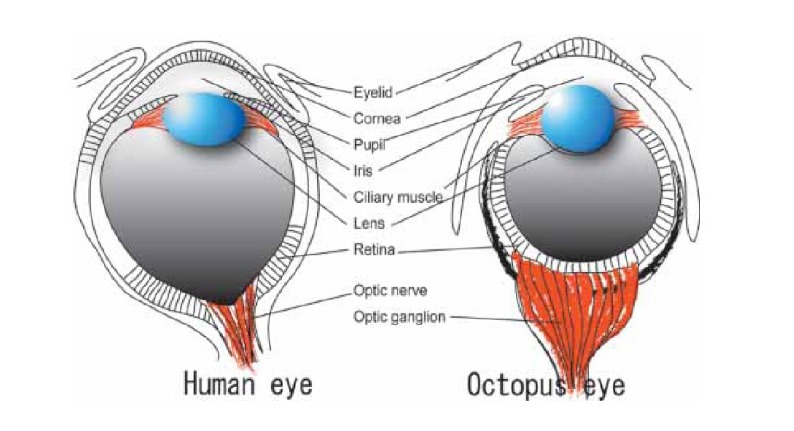 The last common ancestor of humans and the octopus is believed to have lived in pre-Cambrian times (>500 million years ago). Studies have shown that 69.3% of the genes expressed to make the eyes of the respective organisms are shared in common—amazing!

The last example of convergent evolution we’ll consider is that between marsupial and placental mammals. Marsupial mammals like the kangaroo give birth to young that finish their development inside a pouch, while placental young are fully developed inside the mother’s womb prior to birth. There are placental and marsupial cats, squirrels, ground hogs, anteaters, rabbits, moles, mice, and wolves. 29,30 The last common ancestor of marsupial and placental mammals is thought to have lived over 100 million years ago. Most marsupials live in Australia and their placental counterparts in North America.

Despite this great temporal and geographical separation, marsupials in Australia and placentals in North America have produced varieties of species living in similar habitats with similar ways of life. Their resemblances in overall shape, locomotor mode, and feeding and foraging are superimposed upon different modes of reproduction, the feature that accurately reflects their distinct evolutionary relationships. 30

Drawings of some of the marsupial/placental “pairs” are shown in the image below. 31 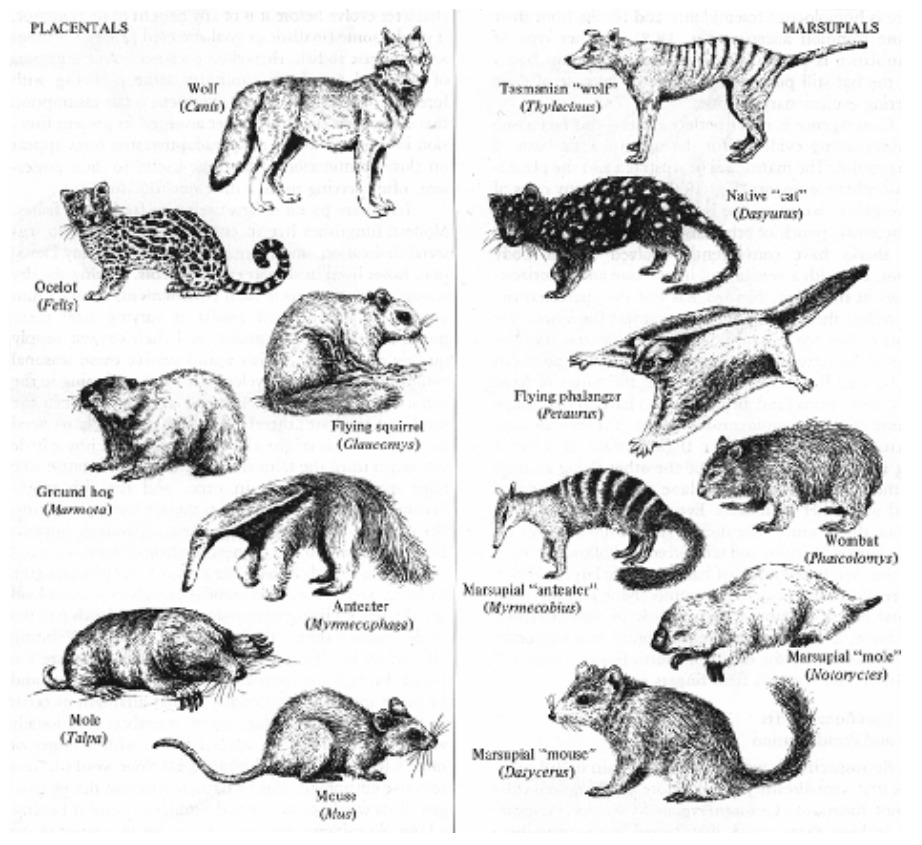 Hence all these marsupials and their placental counterparts are similar in morphology and ways of life yet because of the differences in reproduction are thought to have come upon these striking similarities independently through a random mutation/natural selection process over millions of years.

Convergent evolution, the proposed explanation for similar characteristics in diverse and unrelated species, is wanting. A better explanation that is consistent with the data and observation is intelligent design. For example, humans who write modular computer programs may use similar subroutines in otherwise very different software. Diverse organisms can have similar features because they have the same Creator.

In 1993, Walter ReMine wrote a book entitled The Biotic Message. In the book he explains Message Theory:

Life was reasonably designed for survival and for communicating a message that tells where life came from. The biotic message says, “Life is a product of a single designer - life was intentionally designed to resist all other interpretations of origin.” 32

ReMine later explains how convergence is part of the biotic message:

Nature contains an abundance of convergence. These are constructed in a manner most difficult for evolution to explain. Convergences are strikingly similar but not identical. This is precisely as they should be to avoid looking like evolution.

Indeed, scripture teaches that God has provided abundant evidence that there is a creator. Romans 1:20 says:

For since the creation of the world His invisible attributes, His eternal power and divine nature, have been clearly seen, being understood through what has been made, so that they are without excuse.

The occurrence of similar complex adaptations in diverse species can only be explained by a common creator, as God intended. 