For those who adhere to a literal interpretation of Genesis and believe in a young earth, scripture is the first, final, and unrivaled authority (sola scriptura) on the questions of the origin of the universe, the origin of life, the origin of man, and the age of the earth. Young Earth Creationists (sometimes referred to as “YECs”) believe that the Bible is inerrant and clear in its teachings about origins. Good exegesis based upon the grammatical-historical hermeneutical approach and comparing scripture with scripture leads to the conclusion that the earth was created in six 24-hour days in the recent past. Nature viewed through the lens of scripture lends support to the recent creation view.

There were no human eyewitnesses to the creation of the universe, the earth, and life. It is for this reason man on his own can never really know what happened. But there were eyewitnesses. The triune God was there and has communicated his observations to us via Moses in scripture. God’s Word is as true as any observable fact of science. For this reason, one must take both the facts of scripture and science into account when considering origins. However, scientific theories (e.g., macroevolution) which are not in agreement with the clear teachings of scripture are wrong by definition; science is always subordinate to scripture, never vice-versa (except in cases where scripture is silent or equivocal), nor should they be given equal weight. 1 When science and scripture seem at odds, scripture is given the benefit of the doubt. To see this, imagine consulting science to validate one’s view on the virgin birth or the resurrection. Clearly, if science were given the final word here, one’s faith in Christ would soon falter.

There are many biblical reasons to accept the YEC position and reject alternative views such as theistic evolution, the gap theory, the day-age theory, progressive creation, the framework hypothesis, etc. First, the order of the events during the creation week are completely inimical to any cosmological, geological, or biological evolutionary account. Second, the original language of Genesis 1 clearly indicates that the creation of all things was accomplished in six literal 24 hour days. Third, physical death does not enter the scene until after the Fall, making biological evolution impossible and the fossil record a product of a global Flood. Fourth, the creation account is always treated as history by Bible authors, never as allegory. Fifth, observed scientific facts and well established natural laws are completely harmonious with the biblical account. The creation account explains the origin of information in living things and the precise tuning of physical laws that support life, while naturalism can only offer uncertain and improbable speculation. The existence of the universe itself is explained by creation but is beyond the reach of science to explain.

The history of the universe, earth, and life according to recent creation, progressive creation, and the standard evolutionary scenario are contrasted in the Table 1. It is clear from these few examples that God did not create in a way that even remotely resembles modern evolutionary thinking. It may be that God created in this way so there could be no mistaking Genesis for an allegory to some naturalistic scenario. Making the creation days into vast time spans will not make the sequence problem go away. For example, how does the passage of millions of years between the emergence of sea mammals (day 5) and their alleged evolutionary land mammal ancestors (day 6) help reconcile scripture with evolution? One solution might be that the “days” of creation somehow overlap, but there is no evidence from the text this is the case; each day starts, stops and is distinct from every other day. The meaning of the word “day” in Genesis 1 is clearly a normal 24-hour period. Although the Hebrew word yom translated day throughout Genesis 1 can denote time spans longer than a literal day, the context of its use in Genesis 1 and comparison with other scripture leave little doubt of its intended meaning. For example, each day during the creation week (e.g., Gen 1: 5) is described as having an evening and a morning (except day 7). When God separates light from the darkness (Gen 1:4-5), He calls the light “day” and the darkness “night.” Does it make sense to call a time span of millions of years “light”? Scripture even defines what a “day” is in Gen 1:3-5:

In other words, one day has an evening and a morning, light and darkness, just like the days we experience.

Every occurrence of the word “day” in the above passage is yom in the original text. In the first part of the passage, God is clearly referring to six literal 24 hour days when instructing the people when to work and rest. God’s rationale for this pattern is his own activity during creation week. The same comparison made between man’s work week and God’s creation week is echoed in Ex 31:15-17. Clearly, 24 hour days are in view in these passages. It is also significant that most commentators prior to the 19th century understood the days of Genesis 1 as 24 hour days and/or thought the creation was only thousands of years old; it was only after the rise of Darwinism and associated geological theories that people began to try to make scripture accommodate long ages. 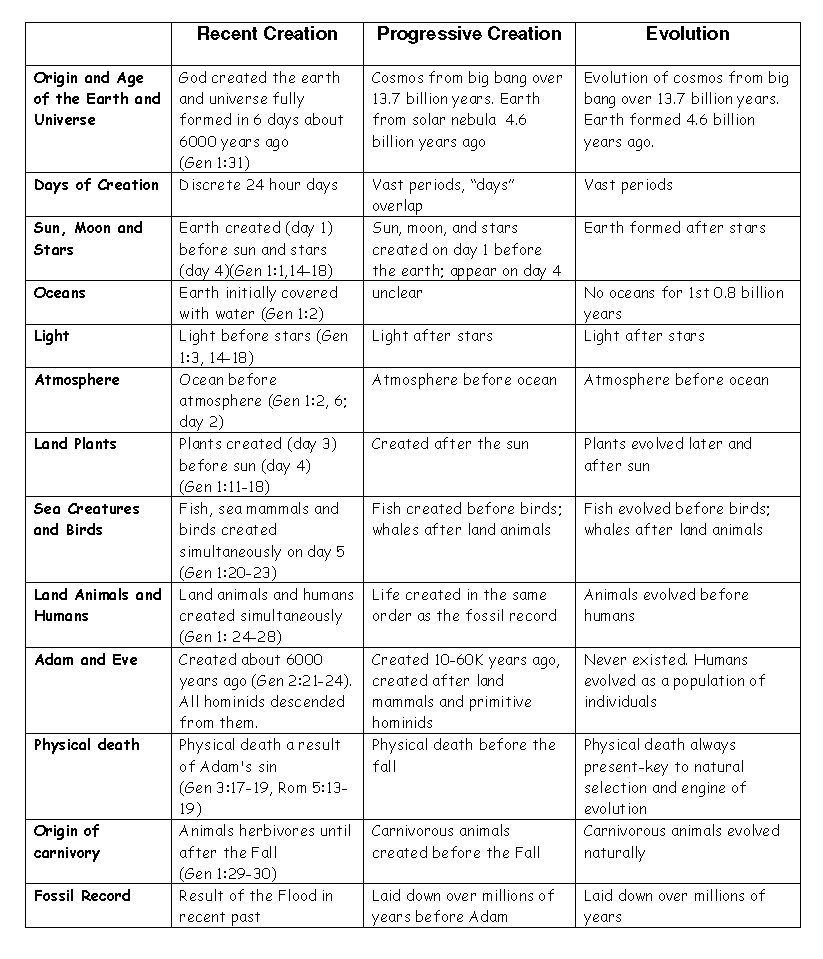 As another example, the Hebrew word translated “day” in Gen 1:14-19 is yom as shown below:

The contexts in verses 14-18 unambiguously indicate that yom means an ordinary 24 day in those verses. Progressive creationists would say that the meaning of yom in verse 19 must be a long period of time, but it is clear from the passage that the meaning remains in accord with the previous uses: an ordinary 24 hour day; to say otherwise is reading into the text (eisegesis).

Jesus endorses the recent creation position when he speaks with the Pharisees about divorce:

And he answered and said unto them, Have ye not read, that he which made them at the beginning made them male and female… Matt 19:4 (KJV)

But from the beginning of the creation God made them male and female. Mark 10:6 (KJV)

Progressive creationists also claim that Noah’s Flood was a local rather than global event, but scripture teaches otherwise:

A local flood also invites many questions: Why did Noah build the Ark? Why did God send every kind of animal to the Ark? Why was the Ark large enough to hold all the land vertebrates that have ever existed? Why were birds sent on board? How could the waters rise eight meters above the mountains if the Flood were local? If the Flood had been local, some people would have survived. Jesus said his second coming would be like the days of Noah (Matt 23:37, 2 Pet 3:3-7). Will God’s judgment at the end of history be only partial? God would have broken his promise never to destroy the earth again by a flood (Gen 9:11-16) if the Flood had only been local.

Scripture clearly teaches (Rom 5:12-19) that the physical and spiritual death of men entered the picture after the Fall. 2 Because of Adam’s sin, the ground was cursed (Gen 3:17-18) resulting in poor crop yields and useless/harmful plant species, Eve’s pain in childbirth would be multiplied (Gen 3:16), Adam would have to work hard to have food (Gen 3:19), Adam and Eve would eventually die (Gen 3:19), and the entire creation was cursed (Rom 8:20-22) and as a result is perishing (Heb 1:10-11). Although not explicitly stated, animals were also under the curse as evidenced by the following facts: (1) God originally provided plants for the food of animals (Gen 1:29-30); (2) when Christ sets up His kingdom on the earth, the animals and man will dwell together without any prey/predator relationships (Isa 11:6-9); even the lion will eat straw (Is 11:7). God considered the initial creation “very good” (Gen 1: 31) and yet will make a new heavens and earth at the end of history (Rev 21:1) which is devoid of death (Rev 21:4). If physical death of man and animals was a part of God’s original plan, why would He call his original creation “very good” but then plan to remake the creation without death or carnivorous activity? Clearly, man’s sin resulted in physical death being passed upon himself and the animal kingdom. And not only this, but apparently some animal species were modified/degraded from their original design by the Fall to become carnivorous, parasitical, poisonous, etc. Now since the physical death of man and animals was not in the world until after the Fall, the evolution of animals and man would have been impossible. Evolution involves the “survival of the fittest” as the selection mechanism which allegedly leads to macroevolution, but there can be no evolution where all survive. Also, why would an all-loving omnipotent God use a cruel drawn out process to create man and the animals when He could simply speak them into existence? On the contrary, Christ came to destroy death (1 Cor 15:26-27, 54-55; 2 Tim 1:10; Rev 20:14, 21:4); death was never a part of the original plan nor is it consistent with God’s character. Therefore, all theistic evolutionary scenarios are false. Another implication is that there would not have been the possibility of a fossil record prior to the Fall, making it clear that the fossil record was formed primarily as aresult of the Flood.

Another way to think about the death and suffering question is to compare God’s original creation with the state of affairs after Christ’s return (Table 2).

There is a clear symmetry shown in the state of affairs before the Fall and in the new creation which is consistent with God’s character and plans and with scripture. This symmetry is broken if death occurred before the Fall.

Some believe that the first few chapters of Genesis are written as poetry or allegory and therefore should not be taken as literal history. However, when reference is made to the creation account by various Bible authors, we find that the account is taken at face value. For example, an historical/literal understanding of Genesis is seen in the writings of David (Psa 8:3; 33:6-9; 104:19; 148:3-5), Peter (2 Pet 3:5), the author of Hebrews (Heb 1:10), John (Joh 1:1-3; Rev 2:7, compare Gen 2:9), Matthew (quoting Christ in Mat 19:5), and Mark (10:7) to name a few. Indeed, if Adam were not the first literal man from whom all have descended but merely a symbol of men who fall to temptation, there are serious theological implications. If men evolved, they did so as a population of individuals so that Adam would not have been the first man but merely one of a group of individuals. Therefore, sin would not have been imputed to those who were not Adam’s direct descendants meaning there would have been some who would not have been under the curse or in need of Christ as a savior. But this idea clearly contradicts the clear teaching of scripture that all have sinned and fallen short of the glory of God (Rom 3:23, 5:12) and that Adam was the first man and the father of us all. So, we see that the creation account should be understood as history, nothing less.