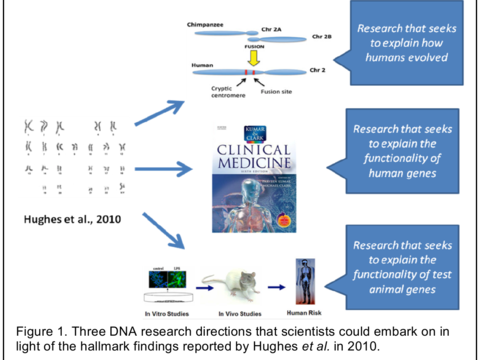 Three DNA research directions that scientists could embark on in light of the hallmark findings reported by Hughes et al. in 2010.

A year ago I wrote an article for this newsletter 1 on a hallmark study by Hughes et al. published in Nature magazine which compared the male-specific region of the Y chromosome (MSY) of humans and chimpanzees and reported that “they differ radically in sequence structure and gene content, indicating rapid evolution during the past 6 million years.” 2 Hughes et al. found that the chimp Y chromosome has only two-thirds as many genes or gene families as the human Y chromosome. It is true that the Y chromosome is somewhat susceptible to change because it has no chromosomal partner and does not experience the exchange of DNA that occurs between partnered chromosomes. However, the extent of the reported difference is still considered remarkable given that the remainder of the chimp and human genomes are thought to differ in gene number by less than 1%. 3 Further, Hughes et al. reported that more than 30% of the chimp Y chromosome lacks an alignable counterpart on the human Y chromosome, and vice versa, whereas this is believed to be true for less than 2% of the remainder of the genome. 3 In my 2010 article, I outlined three DNA research directions (Fig. 1) that scientists could embark on in light of the findings reported by Hughes et al. and encouraged them to follow the good Samaritan (Luke 10:25-37) example and turn their sights to research that might truly benefit the misfortunate in our society. One year later, I’m curious to find out what type of new research this remarkable evidence has spawned.

I searched the PubMed database 4 to determine how many studies were published over the past year with “Y chromosome” or “MSY” or “male-specific” and “chromosome” in their title. I found that 128 such studies have been published since May 22, 2010. Of these 128 Y chromosome-related studies, 29 also include the word “evolution” in their title or abstract text. To determine whether these numbers represent significant increases over previous years, I performed the same PubMed searches for each of the past ten years. 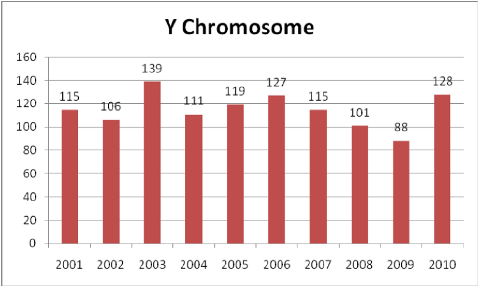 PubMed database counts for the number of studies published with “Y chromosome” or “MSY” or both the terms “male-specific” and “chromosome” in their title for each year over the past decade. 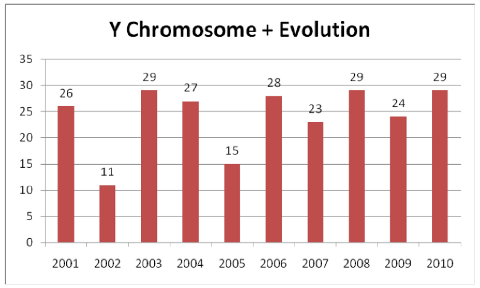 PubMed database counts for the number of studies published with “Y chromosome” or “MSY” or both the terms “male-specific” and “chromosome” in their title, plus the term “evolution” in their title or abstract text, for each year over the past decade.

In scientific research, researchers commonly report the mean and standard deviation (SD) for a set of data, and only effects that fall far outside the range of SD (generally 2 SD from the mean) are considered statistically significant. The annual mean for “Y chromosome” publications over the past the annual mean for “Y chromosome plus evolution” publications has been 24 ± 6.3 SD. Thus, while the past year totals for both of these types of publications were above their ten year average, neither increase was more than a single standard deviation above their respective ten year mean.

So far, the Hughes et al. study does not seem to have had a significant impact on the number of studies published on the topic of the Y chromosome or on the evolution of the Y chromosome. It is possible that I may have overestimated the interest of evolutionists on this topic. Perhaps they are satisfied with the original/existing general explanations for the “rapid evolution” of the Y chromosome. On the other hand, knowing how long it takes to initiate, complete and publish scientific research in this field, 1.5 years may be too short a time period to expect a noticeable increase in publications.

Another, perhaps more realistic, indicator of the impact that the Hughes et al. study may have had on the scientific community is the number times it has been cited, particularly when it serves as the main focus of another author’s research. Incredibly, according to PubMed, the remarkable findings of Hughes et al. have only been cited nine times by other papers in the 1.5 years since it was published. The focus of 6 of the 9 papers was on the topic of evolution. In three of those papers, the Hughes et al. paper was very peripheral to the author’s focus. Most of the research community seems to be either uninterested or more or less satisfied with the general explanation proposed in the original Hughes et al. paper that the differences, while unexpected, can be explained by the mechanisms associated with suppressed recombination and increased exposure to natural selection in the unpaired Y chromosome. 3 ,5 ,6 ,7 One group suggested that the Hughes et al. estimate of the differences was too high. 7 Using a different method for comparing genomic sequences involving “adaptive seeds,” Kiełbasa et al. reported homologous human counterparts to more than 86% of the chimpanzee sequence versus the <70% reported by Hughes et al. They acknowledge that this is still a high rate relative to other chromosomes and offer the same general explanation as described above for the fast evolutionary rate of Y chromosome divergence. Schaller et al. reported that, unlike bonobos monkeys (N=16), the chimpanzee’s (N=17) MSY is highly variable. 8 They speculate that this difference is highly influenced by their social and mating behavior. In chimpanzees, multiple males copulate with a receptive female during a short mating period, which the authors feel places a higher natural selection pressure on chimpanzee fertility genes.

Only one paper reported the results of original research aimed at explaining the remarkable differences between human and chimpanzee sequence structure and gene content reported in the Hughes et al. study. By analysis of microarray testicular expression data representing a small number of male chimpanzees and men, Mulugeta et al. obtained information indicating that meiotic and postmeiotic X chromosome silencing might be more effective in chimpanzee than in human spermatogenesis. 9 From this, they suggest that the remarkable reorganization of the chimpanzee Y chromosome, compared to the human Y chromosome, might have an impact on its meiotic interactions with the X chromosome and thereby on X chromosome silencing in spermatogenesis. According to the authors, “this is a remarkable shift towards lower expression of a large number of X-linked genes in chimpanzee testis, and it can be questioned what is the biological rationale behind positive darwinian selection of sequence changes acting towards such a lower expression.” Their hypothesis is that “evolutionary changes in the structure of the Y chromosome in the chimpanzee lineage might have an impact on its interactions with the X chromosome in male meiotic prophase, thereby affecting chromatin structure and transcriptional dynamics of the X chromosome in spermatogenesis, leading to a quantitative and qualitative improvement of sperm production.”

In last year’s article, I pointed out that only two reports of chimp DNA sequences had been published at that time that were not biased by being based on the human DNA orientation and that both of those studies provide reasons to question the veracity of previous speculations and earlier drafts of the chimp DNA sequence. I asked the question: “Is it possible that a similar unbiased analysis would reveal similar discrepancies in other chromosomes?” So far, no additional, unbiased studies of other chimpanzee chromosomes have been published to answer this question.

Meanwhile, there are indications that we may soon receive news from creationist scientists in this area of research. One of the leading arguments used to support the concept that apes and humans descended from a common ancestor is the “chromosome 2 fusion model” (Fig. 4). 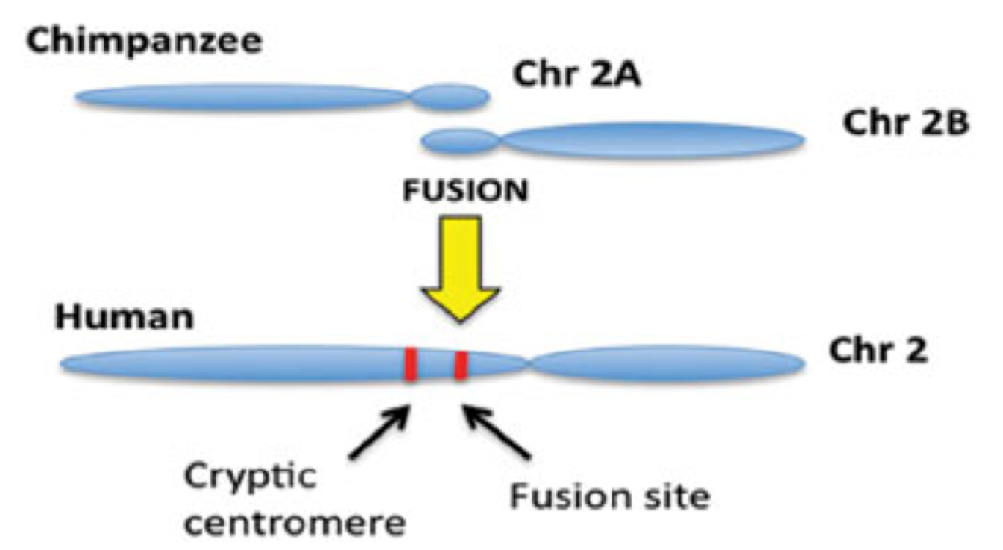 The “chromosome 2 fusion model” claims that the end-to-end fusion of two small chimpanzee-like chromosomes (now called 2A and 2B in chimpanzees) formed one stable large chromosome in humans (chromosome 2). It is the primary argument used to support the concept that chimpanzees and humans have a common evolutionary ancestor.

According to Dr. Jeffrey Tomkins, a majority of the data for the fusion model is based on indirect laboratory techniques that were commonly used prior to the revolution in genomics, before DNA sequencing became routine and cost-effective. 10 He and Dr. Jerry Bergman, a professor at Northwest State College in Ohio, recently completed a new analysis of the scientific literature and available DNA sequence data that seriously calls into question the validity of the fusion model and human evolution in general. Their research is tentatively scheduled to be published in the Journal of Creation and will be summarized in an upcoming issue of the Institute of Creation Research (ICR) Acts & Facts. Keep an eye out for their research results, “for the invisible things of him from the creation of the world are clearly seen, being understood by the things that are made, even His eternal power and Godhead; so that they are without excuse” (Romans 1:20).