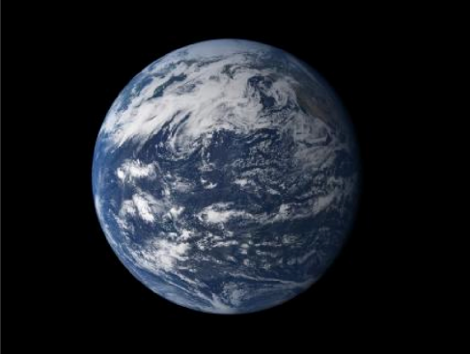 Here is our Earth, a young planet.

Achbishop James Ussher has been the butt of more ridicule on the subject of suggesting a date for the creation of the world, and ultimately the universe, than anyone else in history. He proposed the date of October 23, 4004 BC, and this date appeared as a marginal footnote in many Bibles up until the mid twentieth century. What should we think about his work that brought him to this conclusion?

In most history books it is close to impossible to tell where the source of the information was derived, and separating the editorials from the facts is even harder. This is not the case with Ussher’s work. It contains more than twelve thousand footnotes from secular sources and over two thousand quotes from the Bible or the Apocrypha. There is little to no editorializing and most editorial comments are from the original writers themselves. 1

In 1650–1654 Archbishop Ussher published his meticulously researched work Annals of the World in the Latin language. This work of 1600 pages was a complete history of the world covering every major event from the beginning of time to 70 AD. In 1658, two years after his death, it was published in the English language. 2 Thanks to the work of Larry and Marion Pierce, we now have a modern English version, so we may see for ourselves what this classic work has to offer.

Julian dates are used throughout Ussher’s work. As many readers are already aware, the Gregorian calendar that we use today and the Julian calendar do not directly correspond as the Julian calendar does not drop three days every four hundred years, so the seasons drift. As we get closer to January 1, 45 BC, the date Julius Caesar reformed the calendar, the Julian and Gregorian dates converge. Astronomers use Julian dates today to date astronomical events using the actual number of the day from the start of the Julian Period in 4713 BC. Historians date all pre-Christian events using the Julian scale extended backward.

Looking at the man himself, James Ussher was born in Dublin, Ireland, in 1581. As a young man he committed himself to the work of the Church, and the Lord honored him in his resolve. At the age of 18 he entered Dublin University, which was a major university at that time. At the age of 20, he was ordained a deacon and a priest in the Anglican Church at Dublin. When He was 26, he was appointed chairman of the Department of Divinity at Dublin, an honor awarded to very few at that age. He was a professor from 1607 to 1621 and was appointed twice as vice-chancellor of Trinity College in Dublin.

From his early school days, Ussher excelled in history, and from the time he was 20 and continuing the next two decades he read every history book he could get his hands on. He excelled in church history and prepared several large authoritative works dealing with the Irish and English churches from the times of the Apostles. In 1625, he was appointed Archbishop of Armagh, which at that time was the highest position in the Irish Anglican Church. Being an expert in Semitic languages, he argued for the reliability of the Hebrew text of the Old Testament and wrote extensively on Christianity in Asia and other Bible related topics. In 1628, King James appointed him to his Privy Council in Ireland.

In preparation for his work, Ussher first made the decision that the Bible was the only reliable source document of chronological information for the area and time frames recorded in it. Before the Persian Empire, little is known about Greek, Roman, and Egyptian history or the history of other nations. Much rests on speculation and myth. Dates in secular history become more certain with the founding of the Media-Persian Empire. For events before this time, Ussher relied solely on the data from Scripture to construct his historical framework. He chose the death of Nebuchadnezzar as a reliable date to anchor all the earlier biblical dates. Working backward from this date, he ended up with his date for the Creation of October 23, 4004 BC.

How did Archbishop Ussher arrive at this date? The Scriptures themselves do not give a date for the day of Creation, let alone October 23, 4004 BC. Because the Jews and many other ancient peoples started their year in the autumn, Ussher made the assumption there must be good reason for it. He concluded that God created the world in the autumn. After consulting astronomical tables he picked the first Sunday after the autumnal equinox. 3 We all know that the equinox occurs around September 21, not October 23; but in the past the Jews and the Egyptians did not use a year based on the moon’s cycle. Instead they had a year made up of twelve months with each month having thirty days. At the end of the year they tacked on five days and every fourth year they added 6 days. Unfortunately a year of 365 days is too short and a year of 365.25 days is too long. Eventually you will have to drop days to keep the seasons from drifting.

Before Julius Caesar reformed the calendar, no correcting adjustments had been made. For the four thousand years from the creation to Caesar’s time, almost 32 days had to be dropped to make the seasons start when they should. In other words, during those four thousand years, the beginning of autumn had shifted to being 32 days later in the year than it should be. By making this adjustment, Ussher arrived at the date of October 23, not September 21.

But how did he arrive at the year 4004 BC? He took the chronologies in Genesis 5 and 11, together with other Biblical passages. The detailed calculations cover over 100 pages in the original document. To simplify the calculations we will tie the chronology to the fall of Jerusalem in 588 BC. Extremely abbreviated calculations follow in Table 1. By following the calculations, we see that Ussher calculated the year of Creation stating that the date of creation was equal to 588 + 3417 – 1 which gives us a date of 4004 BC.

Ussher started from the Bible and not secular history. That is why he used a date of 588 BC for the fall of Jerusalem and not 586 BC. He made note of the fact that King Jehoiakim’s fourth year as king corresponded to the first year of Nebuchadnezzar’s. 4 Understanding the foundation that Ussher used to base his calculations, namely the one all Christians should begin with that God’s Word is true, infallible, and reliable in every subject written therein; we can easily understand how Ussher arrived at his date for creation. In fact, there is little evidence of any “gaps” in the genealogies as recorded in Genesis, showing the date is reasonable taken within the framework of the stated assumptions.

There is no evidence based solely on solar observations that the sun is 4.5–5 x 109 years old. I suspect that the Sun is 4.5 billion years old. However, given some new and unexpected results to the contrary, and some time for recalculation and theoretical readjustment, I suspect that we could live with Bishop Ussher’s value for the age of the earth and sun. I don’t think we have much in the way of observational evidence in astronomy to conflict with that. 5