The article and links to additional information referred to in this article can be obtained at: http://creation.com/archaeopteryx-unlike-archaeoraptor-is-not-a-hoax-it-is-a-true-bird-not-a-missing-link

For another view, see http://tasc-creationscience.org/article/what-was-archaeopteryx; both views, however, concur that archaeopteryx did not evolve and does not prove evolution occurred. 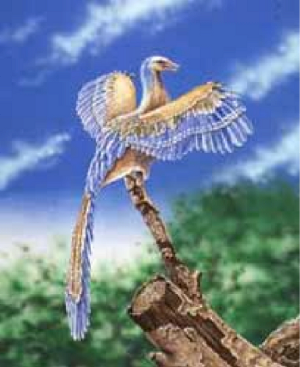 With all the publicity about the Archaeoraptor fiasco (see Archaeoraptor Hoax Update - National Geographic Recants!), some have recalled the 1986 claim by Sir Fred Hoyle and Dr Chandra Wickramasinghe that Archaeopteryx is a forgery. 2 Archaeopteryx is one of the most famous of the alleged transitional forms promoted by evolutionists. This is probably why some anti-Darwinians are keen to dismiss it as a forgery.

However, in the article, Bird evolution flies out the window, the creationist anatomist Dr David Menton shows that Archaeopteryx is a true bird with flight feathers, not a transitional form—and certainly not a feathered dinosaur. And Dr Alan Feduccia, a world authority on birds at the University of North Carolina at Chapel Hill and an evolutionist himself (see Feduccia v Creationists), says:

Paleontologists have tried to turn Archaeopteryx into an earth-bound, feathered dinosaur. But it’s not. It is a bird, a perching bird. And no amount of ‘paleobabble’ is going to change that. 3

Both these expert scientists totally reject the charge of forgery. Dr Menton points out that the Archaeopteryx bones have tiny bumps where the feathers were attached to the bones by ligaments. This was unexpected, so impossible to attribute to a forgery. So it is simply wrong to say that the feathers are just imprints added to a dino skeleton.

Also, Alan Fedducia, in his encyclopedic The Origin and Evolution of Birds, 4 cites a number of reasons why Fred Hoyle is completely wrong. For example, limestone often contains dendritic (tree-like) patterns formed by precipitating manganese dioxide, and they are unique as are snowflakes. Some of them are on both the slab and counterslab containing the Solnhofen Archaeopteryx fossil, including some on top of the feather imprints. Alan Charig et al. found that when he backwardly printed a negative photograph of the counterslab dendrite patterns, they match perfectly with the corresponding dendrites of the main slab. Therefore the dendrites must have formed on the bedding plane before the slab was split.

Since that book, more recent evidence has even further devastated the hoax theory: