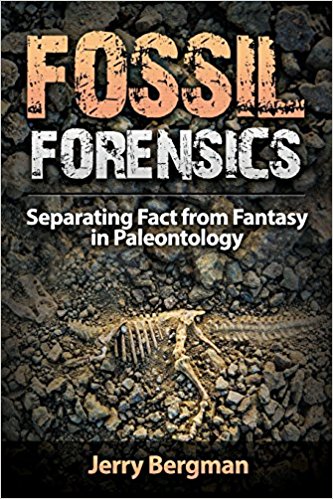 To order this book, click on the image or the order link below:

An Evaluation of the Fossil Record Evidence by Professor Jerry Bergman is an absolutely extraordinary book of 20 chapters.  I have had the great privilege and honor of proofreading books for him for many years now.  This book, in particular, I believe will be important evidence in helping to deal the death blow to evolution's use of the fossil record to advance their theory of the evolution of simple molecules-to-man fairy tale.  I predict it will be a best-seller, and profoundly impact this and future generations.

As a biology researcher who has published in the peer reviewed scientific literature, and also a lifetime college biology professor for 40 years, I am pleased to state that, as I read the draft of the manuscript of this book, I was so intrigued that, when finishing each chapter, I eagerly looked forward to the next fascinating chapter! I co-wrote chapter on turtles with Dr. Bergman, an area I have publisher numerous peer reviewed articles on, and completed a PhD on this topic as well.

This is volume one of a projected multi-volume set that will explore in some detail the fossil record of most all major life forms. Each volume will consist of an overview of the findings related to evolution as presented in the scholarly literature by recognized authorities. This volume covers general categories, such as invertebrates, plants, insects, fish, amphibians, birds, bats, and whales. The next volume will cover specific animals, such as cats, giraffes, woodpeckers, camels, and pandas. I have now looked at the evidence in detail for the evolution of over 100 life forms; and, of those I have researched, no clear evidence exists of their evolution for any of them from simpler life forms.

This finding is quite in contrast to my original conclusion. In college, one text used for a graduate class at Wayne State University in Detroit was C. Loring Brace and Ashley Montague’s 1965 book titled Human Evolution, which included many illustrations of the life forms that linked humans to what evolutionists believe is our common ancestor, an ape of some type. After reading the text and studying the illustrations, I was quite convinced that, for humans at least, the case for evolution was clearly documented. Always a skeptic, I continued to read the literature, and soon realized that my earlier conclusion was naïve, to say the least.

As a biology professor for over 30 years, I have always been fascinated by the wonder of animal design, and this fascination vividly shows in this volume. Each chapter vividly reflects this wonder. As I researched life as related to its putative evolution, I realized that the fossil record is one of Darwinism’s major problems. As this work documents, the fossils tell a very clear account of the history of life quite in contradiction to the story of Darwinism. The reason is because,

the most striking fact about nature is that it is discontinuous. When you look at animals and plants, each individual almost always falls into one of many discrete groups. When we look at a single wild cat, for example, we are immediately able to identify it as either a lion, a cougar, a snow leopard, and so on. All cats do not blur insensibly into one another through a series of feline intermediates. And although there is variation among individuals within a cluster (as all lion researchers know, each lion looks different from every other), the clusters nevertheless remain discrete in “organism space.” We see clusters in all organisms that reproduce sexually. 1

This has always been, and still is, as this book documents, the major problem for Darwinism.