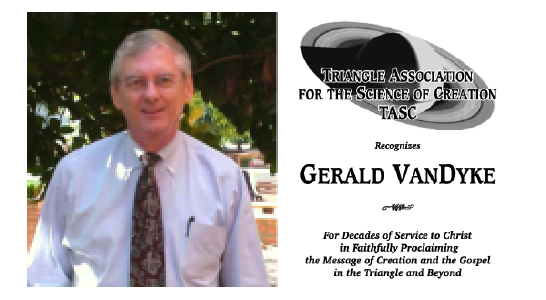 This newsletter will review TASC’s activities in 2006 and look ahead to our plans for 2007. Besides by our monthly newsletters and meetings, TASC reached out into the community in a variety of ways through on-campus debates, presentations at churches and schools, and participation in a video on intelligent design. Substantial progress was made towards preparing a web-based Sunday school curriculum. The TASC board held a retreat, four board meetings, and an awards dinner. TASC also began the year with a new chairman.

Joe Spears, TASC’s webmaster and archeology buff, presented a talk on creation and intelligent design at the Unitarian Universalist Fellowship of Raleigh in March to an estimated group of 35. His talk was well received and followed by lively discussion.

Dr. Gerald Van Dyke presented a talk on creation to the Fellowship of Christian Athletes (FCA) chapter at Ravenscroft School in March. Gerald, who recently retired from North Carolina State University where he was Professor of Botany for many years, has been sharing about creation in the Triangle for decades and is one of TASC’s founding fathers. The TASC board recognized Gerald at its December board meeting by presenting him with an engraved plaque of recognition. Gerald is currently exploring overseas missions. See his testimonial about sharing creation later in the newsletter.

The TASC board held a retreat in March at Topsail Beach. It set goals for 2006 as well as enjoyed fellowship and the scenery. An agreed long term goal for TASC that came out of the retreat was to plant creation Sunday school classes in local churches. An associated goal was development of a modular creation Sunday school curriculum designed to be covered in one quarter. Mark Stephens identified a curriculum called “The Story of Creation”, created by Dr. Joseph Lenard and Donald Zoller of Pinehurst, North Carolina. They have graciously granted TASC permission to adapt and distribute these materials. TASC is currently converting the electronic version of their voluminous work into a web version which should be ready in early 2007. With the curriculum in hand, we should be equipped to plant creation Sunday school classes in local churches. Please contact us if your church would be interested.

TASC presented invited talks at Bethesda Baptist Church in March and again in April. Tom Gurganus, our host, had this to say after our first visit: “The response to you and what you talked about was great. We had a very good discussion last week spawned by some of the things you talked about.” 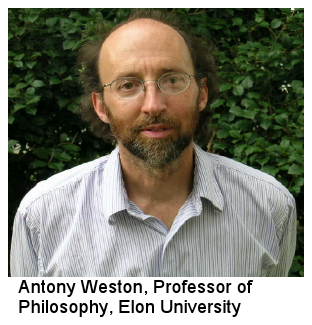 TASC was invited to Elon University in April to participate in a class discussion/debate on creation, evolution, and intelligent design. The class was Philosophy 113C, Critical Thinking. Students were required to identify a topic or issue, take a position on that issue, and then invite an outside person with experience and knowledge on the topic with a different point of view for an in-class discussion. There were five students working as a group arguing against creation. The discussion was cordial and stimulating. The class instructor, Professor Antony Weston, had this to say about the discussion in a subsequent e-mail: “Much of your approach was unexpected to me. Creationists I have known have tended to be much more dismissive of science, even to the point of waving their hands at all of it and simply insisting on the ‘truth’ of Scripture without any more subtle or informed thinking at all. Whereas you are impressively and deeply committed to science and conversant with it.”

TASC’s own Gerald Van Dyke, North Carolina State Professor of Botany, participated in a two-hour on-campus debate in April before a group of about 200 concerning the teaching of intelligent design in public schools. On the side of intelligent design were Gerald Van Dyke and Robert Hambourger, an NCSU associate professor of philosophy. The pro-evolution side was represented by molecular biologist John Gray and NCSU philosophy professor Douglas Jesseph. Both sides made points that were left unanswered by their opponents, resulting in a draw in the opinion of this observer. Nevertheless, one key observation made by Dr. Hambourger was the evolutionists’ dangerous intolerance to allow open discussion of the flaws in evolutionary theory in science class, all in the name of civil liberties. The News and Observer reported on the event (http://www. newsobserver.com/102/story/432109.html). We are extremely proud of Gerald for his willingness to engage the opposition in a public setting on this important issue.

TASC was invited to speak at Crossways Community Church during Sunday school and the morning church service in April. The topics presented included the theology and science of creation. 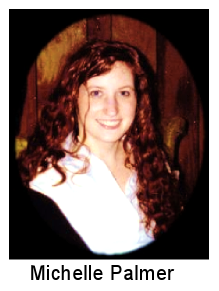 TASC was privileged to participate in the making of a video on intelligent design in May, produced by the non-profit organization North Carolina Family Policy Council (http://www.ncfamily.org/). The 20-minute video is one of twelve segments in a Bible study series entitled Family Policy Perspectives. Mike Kinnaird, former TASC chairman, and Dan Reynolds joined Philip Johnson, founder of the intelligent design movement, in presenting the case for intelligent design. The video series is available on DVD. See http://www.ncfamily. org/specialfpperspectives.html for more information.

The TASC Board met for a fellowship dinner in August at the Weathervane restaurant in Chapel Hill. At the dinner, two former TASC chairmen, Mark Stephens and Mike Kinnaird, were presented with plaques in appreciation for many years of faithful service. 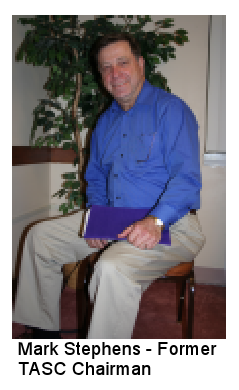 TASC made a presentation on the age of the earth on October 22 at Cary Baptist Church.

TASC’s chairman, Dan Reynolds, spoke at to the FCA chapter at Athens High School on December 8.

TASC moved its website to another server after being attacked by hackers in December. Many thanks to Joe Spears for his expertise and dedication to get the job done!

TASC board member Javier Valdivieso is currently in Latin America sharing creation and the gospel in churches.

Dan Reynolds mentored a high school student from Virginia on a biology project concerning creation and intelligent design in December.

TASC has completed a new flyer for distribution at meetings and talks.

We will be bringing you profiles of board members this year so you can get to know us better.

Everett Coates has a BS in geology from NCSU and is a Licensed Soil Scientist. He is an Environmental Services Team Leader employed by Wake County. His ministry activities this year included leading a middle school boy’s summer discipleship group through his church, presenting a creation-based personal testimony at his daughter’s Fellowship of Christian Athletes (Clayton High School) meeting (approximately 15 students present), distributing a case of the book, Exposing Evolution, and presenting the gospel. Everett presented an excellent and original talk on creation geology last year at a monthly TASC meeting.

A TESTIMONIAL FROM GERALD VAN DYKE

My son-in-law was sent to Turkey (Istanbul) through his employer for a year’s stay. My daughter, Mandy, and three of my granddaughters went along. They went to a church a few months ago, and while there Mandy saw a woman she thought might be an American, and she asked her if she was from the States. She said yes that she was from Oregon. Mandy told her she was from Raleigh. The woman said that back in the late 80s she had come to NCSU for a study leave from her University. While in Raleigh she had felt moved to attend a church service where an NCSU professor was giving a creation talk. At the end of the service an invitation was given to receive Christ, and she accepted Jesus as her Lord and Savior. My daughter told her that that professor was her dad. I’m leaving for Turkey to spend Christmas with the family there and hope to meet this woman.

Chairman’s Comment: God is good! What a confirmation to God’s faithfulness and sovereignty!

TASC has planned the speaker and newsletter author schedule for 2007. We are also planning a trip, probably in early summer, to the much anticipated Answers In Genesis Creation Museum due to open this Spring (http://www.answersingenesis.org/museum/). Please join us if you are interested. A firm date will be forth coming soon. TASC also plans to complete the creation curriculum and make it available on its web site. We will be proactive in finding churches that want to start a creation science Sunday school. Please pray for us.