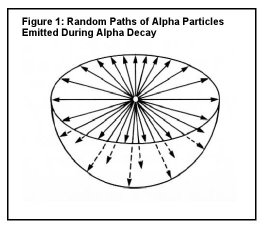 The uranium 238 isotope decays ultimately into lead through 14 intermediate elements, 8 of which involve alpha decay (Figure 2). Each of the intermediate alpha emitting elements can form radiohalos, each with its own unique size. 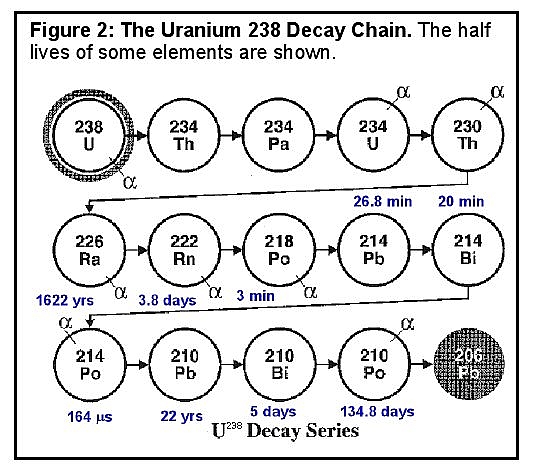 In theory, hydrothermal fluids (hot water) at high temperature transport uranium and its various daughter products through rock along mineral cleavage planes and conduits. Occasionally during transport, an element may react with material in the rock and become immobilized. As the transport continues, additional atoms of the same element accumulate at the same location. Eventually enough atoms of a given element (about 108 alpha decays are required to see a halo 4 ) are present at the location to facilitate the eventual formation of a radiohalo. Radiohalos will not persist above 150° C 5 and hydrothermal transport ceases below 50° C. Hence radiohalos can only form when the rock is between 50-150° C. The rock is in this temperature range for only a few weeks since moving water can carry away heat efficiently. As the accumulated element decays, the radiohalo forms and the decay products accumulate. All alpha emitting decay products will also eventually form radiohalos, each with the same center. The result is a series of concentric shells of discoloration.

Several techniques have been developed to examine radiohalos. Alpha decay during transport results in alpha recoil tracks which can be seen under a microscope after treatment of a cross sectional rock specimen with acid. Even one recoil track can be detected. Uranium undergoes nuclear fission as well as alpha decay. Fission tracks can be detected by the same techniques as alpha recoil tracks. If uranium moves through rock, fossil fission tacks would reveal the path of movement. Mass spectrometric techniques allow for analysis of centers of radiohalos. Hence the decay products of the radioactive elements responsible for the halo can be determined. Photographic emulsions and neutron bombardment have been used to determine if the center of radiohalos still contain any radioactivity.

There are three isotopes of polonium (Po) in the decay chain of uranium238. These are Po218, Po214, and Po210, with half lives of 3 minutes, 164 microseconds, and 138 days, respectively. The amazing fact is that there are radiohalos in Precambrian granite ("basement" rocks of the earth's crust) that are attributable exclusively to these polonium isotopes without evidence of radiohalos from precursor elements, that is, the polonium appeared to be parentless or orphan. Many of the polonium radiohalos are isolated from any nearby uranium radiohalos which could theoretically be sources of the polonium or its precursors. In addition, no evidence of alpha recoil tracks, uranium fission tracks, or conduits leading up to these polonium radiohalos are observed. The precursor of polonium 218 is the alpha emitter radon 222, a gas with a half-life of 3.8 days. If radon had been the precursor of the polonium, there should have been evidence of its alpha recoil tracks, but none was found. The type of lead expected from polonium alone was detected ruling out the presence of uranium at the radiocenters. No evidence of extant radioactivity was found; the radioactivity responsible for the radiohalos was now extinct, thereby adding additional evidence that the halos were not derived from uranium. The challenge is how to explain how these radiohalos, by all evidence formed exclusively from polonium, came to be. Saying that they came from transport of uranium decay products has the difficulty of explaining why there are no alpha recoil or fissions tracks in the vicinity of the halos. How could such short lived elements have been transported through rock without leaving evidence of the transport? Temperatures which would facilitate transport yet allow the halos to persist are short lived due to rapid cooling. Moreover, parentless polonium radiohalos were found in fluorite, a mineral lacking cleavage plains and conduits making the transport hypothesis extremely unlikely. The possibility that the polonium might have come from an as yet unknown decay chain (not uranium) was also excluded experimentally and theoretically. The data suggested rapid (in minutes) cooling and crystallization of the granites containing the polonium radiohalos. If they had cooled slowly, the heat would have erased the halos. Hence Gentry concluded that the only explanation for the parentless polonium radiohalos was sudden creation of the rocks ad polonium by God. By this reasoning, since the polonium was not ultimately derived from uranium but from God's creative power in an instant, the time from nucleosynthesis6 to the formation of the earth's crust collapsed from billions of years to at most a few minutes. The polonium radiohalos were seen as fingerprints of God's creative work.

Snelling, familiar with Gentry's work and conclusions, nevertheless conducted field research to determine if there was any evidence for a natural mechanism for the formation of parentless polonium radiohalos. Several metamorphic rock formations containing parentless polonium radiohalos were found. Snelling concluded that the radiohalos in these formations had been derived from uranium and not fiat creation, reasoning metamorphic rock was formed during the Flood and not during creation week. Gentry has long held that polonium halos found in metamorphic rock formations would probably be from rock created during creation week which was relocated but otherwise unaltered. In light of the evidence discovered by RATE (Radiometric Dating and the Age of the Earth) project for episodes of accelerated radioactive decay in the past (e.g. retention of helium in zircons), Snelling speculates that polonium radiohalos found in metamorphic rock formed during the Flood and an episode of accelerated decay. The accelerated nuclear decay is suggested by the maturity of associated uranium radiohalos (evidence for halos from several decay products in the decay chain) and the number of uranium fission tracks, both consistent with large amounts of radioactive decay. Presumably, accelerated nuclear decay would have produced a rich source of polonium and its precursors. Geochemical changes in the rock often releases water as a by-product. This hot water would then act as a hydrothermal fluid transporting polonium and its precursors through cleavage planes and conduits to sites where polonium could accumulate and eventually form parentless radiohalos. While Snelling says most polonium radiohalos are usually associated with nearby uranium, Gentry has observed polonium halos well removed from nearby uranium and apparently isolated from any obvious cleavage planes, crystal defects, or conduits. In addition, Snelling did not look for alpha recoil tracks, evidence that would have strongly supported his case. Gentry has long said if anyone would ever synthesize a hand sized piece of granite containing just one polonium 218 radiohalo, he would consider his explanation of an instantaneous formation of the earth's crust as falsified. Interestingly, when granite is melted and allowed to cool, it forms rhyolite, a rock with a very different texture and mineral composition.

It may be possible that there are two mechanisms for formation of parentless polonium radiohalos, one involving God's direct intervention at creation of the earth's crust, and the other involving some transport mechanism. Whatever subsequent research reveals, these fine Christian men and scientists have shown their dedication to God and His Word while doing excellent scientific research. They show how Christians can differ over scientific theories while remaining true to God's Word.