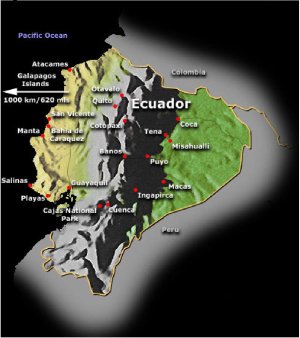 Figure 1 - Location 1: Las Peñas: The coast line is formed with thousands of thin colorful layers of sedimentary rock (Figure 2), exposed to erosion by the tides of the Pacific Ocean. These visible layers are just the tip of what probably extend thousands of feet below sea level.

In December 6, 2006 I had the opportunity to arrive in Ecuador, South America (Figure 1) for a month and a half trip. Mainly my family was looking to have vacation time, but all turned out to be filled up with adventure and discovery. After being involved with creation science, suddenly my eyes started catching sites of evident catastrophism—so the adventure began. In this article, I will present the first finding at Las Peñas, located northwest of the country not too far from Atacames Beach.

At this site, I found fossils at different depths of strata which in secular geology are interpreted as being deposited at different ages based on the Geologic Column, 1 in contrast to biblical catastrophism which states that a one time major event like the Deluge is the cause for massive erosions, transportation, sedimentation, and lithification (fossilization), among other geologic phenomena. 2 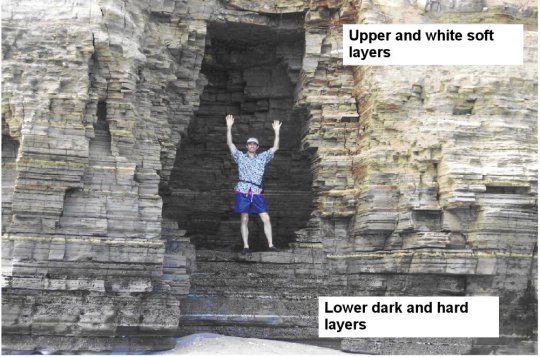 These fossils findings correlate with the conditions and timing for their formation, which are interpreted quite differently by evolutionists and creationists. As a premise for understanding these findings, let me summarize the current interpretations for fossil formation.

Secular geology asserts that fossilization is a rare occurrence even though “…millions of fossils has been discovered and million more awaiting to be discovered”. They also state: “In the first step of fossil formation an animal or plant must die in water or near enough to fall in shortly after death. The water insulates the remains from many of the elements that contribute to decomposition. Bacteria consume the soft body parts but leave the hard exoskeleton intact” 3 (as in the case of a trilobite). I would like to ask, “What about creatures without exoskeleton like jelly fish”, as in Figure 3. 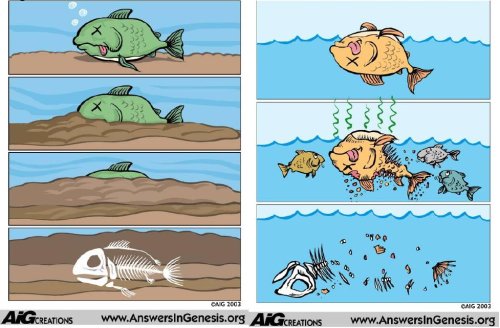 A. How does the fossilized creature get trapped? Evolutionists assume that the dead creatures (and millions of them) were so lucky to “die in water or near enough to fall in shortly after death.” If that is the case, has any single case of such an event been recorded in the present day? Where are the examples? What I know of sudden buried creatures are from a catastrophic event like the explosion of Mount St. Helens in 1980, where thousands of trees were transported to the nearby Lake Spirit, sank in a vertical orientation, and were rapidly covered by sediments, giving the appearance of a forest at the bottom of the lake. 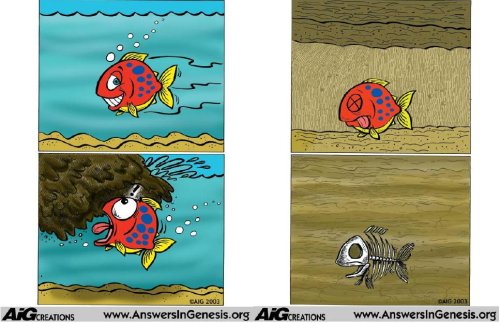 Creationists support their interpretation (Figure 5) on a catastrophic water event as recorded in the Bible, the Deluge at a world wide scale. Suddenly buried by gigantic masses of mud, all sorts of creatures should be buried, even alive, giving no time for scavenger’s or even bacteria to decompose the carcasses. Very fine examples of jelly fish fossils, which have no exoskeleton, have been preserved. Furthermore, unfossilized soft tissue from fossil bone of Tyrannosaurus rex has been recently recorded? 4

B. How long does the sedimentation process take and how does it occur? The evolutionist affirms, “As time passes, sediments bury the exoskeleton. The faster this happens the more likely fossilization will occur. Land and mud slides definitely help. River deltas are also good for quick accumulation of sediments.” 5 The timeframe involved here is millions of years; here it is another lucky event for the remains (and millions of them) to get covered by sediment without decomposition. Special cases like polystrate fossils (e.g., tree trunks), that cross several layers with supposedly thousands of year between them, are a real problem for the evolutionist to explain their formation.

With these bases in mind, I found several fossils of interest in Las Peñas. A tree leaf and partially fossilized sea shell from the upper white layers (Fig. 6A, 6B) and petrified wood at the very bottom where I’m standing (Fig. 6C, Fig. 2) which is in intermittent contact with sea water at high tide. These lower rock layers were hard. Interestingly the top white layers that are not under seawater at high tide are soft and contain sea shell fossils that are also soft (partially fossilized). I was able to scratch the matrix with my finger nail. 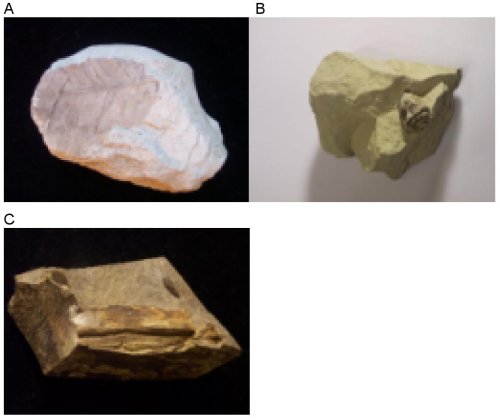 Furthermore due to the tide erosion some fragments of the top layers (in white color) collapsed and fell on the sand, these fragments were hard before they eroded due to high tide. So based on these findings, I wondered, “How long does it take for a soft layer to become hard like sandstone or limestone? Does the effect of the sea water accelerate the process of hardening not just for the strata but for its fossils?” Millions of years are not the answer, because those original upper fragments that fell of the sand were exposed to sea water just for weeks or months. Fossilization involves minerals exchange between the fossil and its surrounding strata with water as an agent for mineral transfer.

My personal interpretation of these finding are that after the Deluge the upper white layers (and its contents) in Las Peñas, stayed soft because of their limited exposure to water (from rain and sea water). In contrast, the bottom dark layers where already hardened since the time of the Flood. Also the seawater mineral content accelrated the hardening of strata and lithification of its fossils for those collapsed pieces of white upper layers. More research is needed in this regard, and considering that the flood waters were not necessarily salty 6 as they are currently. If lithification does not take millions of years as evolutionist assert, then the catastrophic biblical model better fits the facts.?