A: The arrow points to a tissue fragment that is still elastic. How could elastic tissue like this have lasted for 65 million years?

B: Another instance of “fresh appearance”.

C: Regions of bone showing where the fibrous structure is still present, compared to most fossil bones, which lack this structure.

This past January North Carolina State University held a dedication for a new wing of the Earth Sciences building, which, naturally, houses the geology department. Being an alumnus of the geology program (1975) I received an invitation to attend. When I saw that one of the featured speakers was to be Dr. Mary Schweitzer, the discoverer of red blood cells and soft collagen (a protein found in most tissues of living organisms) in a fossilized Tyrannosaurus rex bone, I could not miss it.

The event was “standing room only” as Dr. Schweitzer is somewhat of a celebrity in the world of paleontology. Her mentor was Dr. ‘Dinosaur Jack’ Horner who was the pattern for the main character in “Jurassic Park.” How cool is that? We all listened respectfully to the first speaker from the forestry department as he presented information about his work with a global effort to develop and maintain a seed bank for trees that are endangered and to start plantations in other parts of the world to re-introduce biodiversity. But it was not difficult to see that Dr. Schweitzer was the main event on the card.

She gave a brief history of her early discoveries of what appeared to be red blood cells in fossilized dinosaur bone and the intense professional skepticism and resistance to her interpretations of the data that came from the paleontology community. She also presented her later discovery of soft blood vessels (again containing what appeared to be nucleated red blood cells) and elastic bone collagen. It was this last discovery, supported by much laboratory testing of the soft tissue, that finally began to break down the skepticism. Her summary comment about the resistance from her peers about her findings was, “bias drives research.”

For years, creationists have stated this axiom slightly differently by saying, “bias, or presupposition, predetermines interpretation of evidence.” Bias apparently also determines what scientists look for (or do not look for, in the case of soft tissue in “65 million year old” bone fossils). The initial disbelief among paleontologists was due to their presupposition that the bones are 65 million years old, which, according to Dr. Schweitzer, were nearly completely unmineralized (that is, they were nearly fresh in physical condition). Everyone knows that collagen cannot last that long. This also raises the question: how could unmineralized fresh bone last that long?

After her talk, I took the opportunity to speak with her personally. To keep from being shown the door I did not reveal that I was a creationist. I mentioned the estimates of maximum survivability of collagen under ideal conditions based on a laboratory study as being 15,000 years at a temperature of 20° C (68° F). 1  Since two of her graduate students were standing beside her, I can only hope that my mouth did not drop open in disbelief when she responded that lab conditions cannot take into account preservative conditions that may be present in the fossilizing environment. What?!

Here was a very intelligent, widely published, credentialed scientist making a public statement with a straight face (because she believes it is true) which, if uttered by a creationist, would have been held up as absolute proof of the “fact” that creationists are anti-intellectual fools. Her belief is that some unknown process or condition during the fossilization process could protect fragile organic chemicals and structures longer than they would exist in a laboratory free of any destructive factor other than random degradation over time.

The criticism of her work by others was, in her mind, driven by bias, but her criticism and dismissal of laboratory studies that falsified her claim of the preservation of soft tissue through deep time was not. Truth, apparently, can be arbitrarily defined and applied in the “just-so story” world of evolution.

On July 4, 2007 I took an excursion to Yadkin County, in the central piedmont of North Carolina, to collect additional soil samples to analyze microscopically. An earlier report on a few samples collected in Wake County described what I had seen concerning angular grains of quartz sand in the soil versus a lack of quartz sand in the soil’s supposed weathered rock parent material. That report was presented last year at a TASC meeting and in the August 2007 issue of the TASC newsletter.

In that presentation, I mentioned that I had expected to find that most, or at least some, of the grains were rounded by abrasion, but I found none. By their very angular, irregular surface form the quartz grains showed the appearance of having been freshly fractured from larger pieces of quartz rock. This is consistent with a high energy environment of transport and deposition, which is exactly what the Genesis Flood would have produced, even in the abative phase of the Flood (a late phase as the waters were flowing off of the continents according to Dr. Tas Walker’s biblical Flood model of understanding the rock record). 2

In addition, there appeared to be no evidence of chemical weathering on the surfaces of the grains, which should have been present if the soil had an age of hundreds of thousands of years. A laboratory experiment lasting approximately one year and cited in that report showed that crushed quartz sand grains are very soluble in water at normal earth surface temperature and pressure conditions. A very important observation by the experimenters, which I failed to mention in the first report, was that there were “embayments and spikelike projections” on many of the grains after the experiment that were not present at the beginning. The experimenters made no direct interpretations of these structures, but the idea seemed to be that they were the result of the chemical solution of the quartz by the water. Their only comment was that their presence demonstrated that the dissolved silica was not from abrasion of the grains in the water solution.

That brings us back to the new samples collected last year. The Yadkin County soils are much deeper than the soils in Wake County so that the weathered rock was not encountered within 48 inches (the length of my soil auger). Therefore, I was unable to look at any difference between the soil and “parent material.” However, as the photos show, what I did discover was that a few of the grains appeared to be rounded as I had expected to see in the original samples. The photographs below are of fine sand (0.425-0.75 mm). 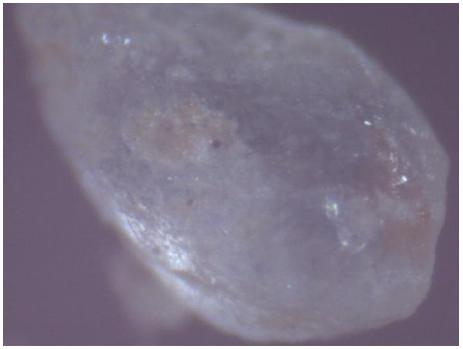 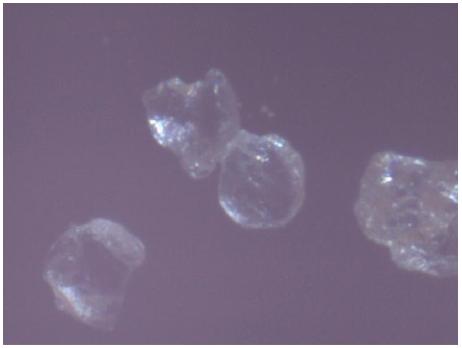 A round grain with angular grains. 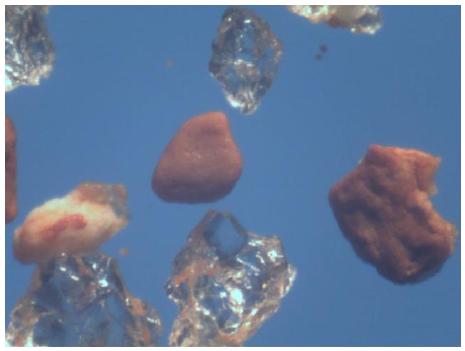 Angular clear quartz with rounded milky quartz or other mineral. 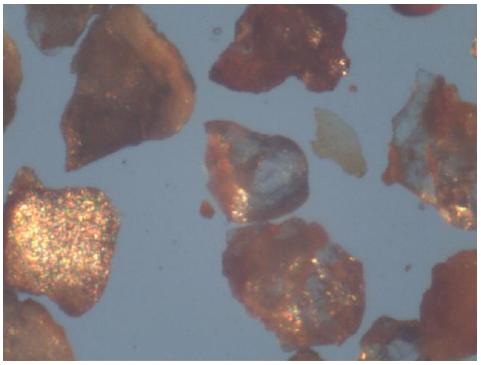 The grain in the center appears to have been rounded then broken by subsequent abrasion.

The rounded grains could have been abraded by the force of the Flood waters during transport and deposition of the mud that became soil. Or possibly they are grains that were originally abraded and then deposited in Flood sediments in another location, then incorporated into the soil sediments. I believe the last interpretation may be correct since the rounded grains are the exception.

The angular grains in these samples also showed no signs of solution weathering. However, in future work, I plan to collect samples of E horizons to determine if evidence of solution weathering is there. The E horizon is the layer between the topsoil and the clayey subsoil, which is the zone of maximum weathering. If sand grains in the E horizons show such evidence, that would serve as a correlation for the time required in the experiment for silica solution to begin since the maximum age of the soil is approximately 4,500 years (the time since end of the Flood).